MWD 055: Build Your Dream Biz from Scratch with Leigh Kellis 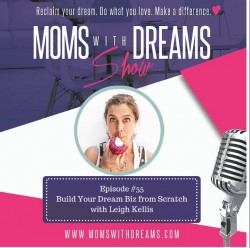 “I felt so strongly about this concept and this business, that it never occurred to me to not go full force with it.” ~Leigh Kellis

Leigh Kellis is the proud owner of The Holy Donut located in Portland, Maine. She built her business from scratch after craving the comfort of a “deeply satisfying yet healthy comfort food – specifically a donut.”

Leigh experimented with donut recipes in her kitchen that eventually became her signature Holy Donuts. Five years later, The Holy Donut has two locations in Maine and has been featured in Elle Magazine, Boston Globe, and was named one of the 10 best donut shops in the U.S.

In this episode, Leigh shares her journey from humble beginnings to a highly successful brand, and some of the key lessons she’s learned along the way.

Putting herself (and her donuts) out there for the first time was scary.

Leigh took us back to when she offered her first batch of homemade donuts to the owners of her local coffee shop. She was nervous, but she was all in at that point. The fear was there, but she wanted it more than she was afraid of it.

She felt a strong sense that if she was craving that comfort food, other people probably were, too. She felt that a “handcrafted, rustic product” would be well received. Leigh also realized that donuts create a nostalgic feeling of comfort much like the feeling you get from eating your grandmother’s food. She wanted to create that feeling for people and allow them to indulge in a healthy, wholesome sweet treat.

Leigh took a leap of faith…

After five months into her wholesale donut business, Leigh could no longer keep up with the demand and work her job. So she did what any single mom would do, right? Not quite. Leigh stepped out on faith. She quit her job and decided that she would live off of the profits of her business. This was a courageous move, but one that had to be made.

When you feel a strong desire to do something…

Go for it! Leigh encourages you not to stop at go – just keep going at full force because that thing is calling you for a reason.

You have to show up every day.

Be prepared to “work your butt off” in the beginning, to lay the ground work and really get your business going.

In the beginning, Leigh did everything – she made all the donuts, iced them, cleaned up, hired and fired employees. You name it – she did it.

Test your market with your business idea before forging forward, which will reduce some of your risk.

Biggest Challenge as a Mompreneur

Leigh had to invest a lot of time and energy into her business, which often made her daughter feel a little left out. It was hard figuring out how to balance her time and attention between being a single mom and an entrepreneur. Leigh admits that she is getting better, but she’s still a work in progress, as we all are.

Leigh recommends that you read

The Secrets of Six-Figure Women: Surprising Strategies to Up Your Earnings and Change Your Life by Barbara Stanny – this book is about the spiritual side of allowing yourself to have abundance and feel good about earning money

Where You Can Find Leigh Online

Or you can search for “The Holy Donut”

“It takes a team to build an empire of good.” You need to build a tribe and ask for help so you can bring more good to the world.